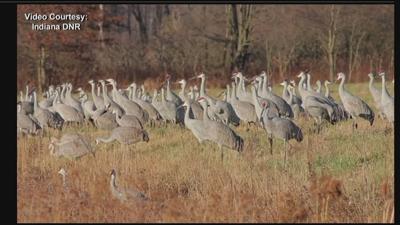 MADISON, WI. (WAOW) -- State lawmakers have proposed a bill that would legalize the hunting of Sandhill Cranes in the state of Wisconsin.

Wildlife officials say the Sandhill Crane population is still a recovering breed, and hunting them could potentially do more harm than good.

The population of the cranes in Wisconsin is estimated to be about 90,000, which experts claim still isn't enough to sustain a hunting population, since it takes about three years to raise one chick.

The main complaint against them is from farming groups, who say the birds damage crops and require state compensation to offset the damages.

"A fall hunting season won't do anything for a spring crop damage problem on cornfields, and the hunt would be rather limited in relation to other waterfowl, or deer or bears or things like that," said Anne Lacy, Senior Manager at the International Crane Foundation.

She says the bill could also be devastating to the Whooping Crane population, which has only been reintroduced to to Wisconsin over the past 20 years.

The bill is still working its way through assembly committee, and has yet to be voted on.

Have story ideas? You can send them to slee@waow.com

Army soldier pleads not guilty in 2016 fatal shooting near UWSP

The Tertill makes an appearance on Garden Goodies

BBB: The COVID-19 pandemic is a “scammer’s paradise”